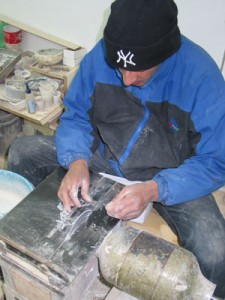 by George Al Ama
As the birthplace of Jesus Christ and one of the most historically significant sites on earth, Bethlehem has for over two thousand years enjoyed the status of being one of the prime destinations for local and international religious pilgrimage from the Christian world. Its history from biblical times to the present is characterised by an unceasing ebb and flow of civilizations which  are still manifest in the architecture of the Church of the Nativity, and to some extent in the architecture of the town itself. This rich cultural tapestry is also visible in the handicrafts produced over the past five centuries by local artisans as souvenirs for pilgrims visiting the town.Several handicrafts have been honed by  Bethlehemite artisans who worked hard to manufacture relics that pilgrims could take back home with them as souvenirs. A variety of local materials were carved, shaped and engraved with Christian symbols, among which the most famous are the Dead Sea stone, olive-wood and mother-of-pearl, a material that was initially brought to Bethlehem from the Red Sea with the caravans plying the trade route. Later, various other sources of shell became available to the artisans which have affected the final product.
Despite the fact that  excavations in and around the town of Bethlehem testify to a millennia-old mother-of-pearl industry, and that mosaics on the walls of the Church of the Nativity dating back to the twelfth century contain mother-of-pearl tesserae (abaculus), the true turning point in the development of the art of mother-of-pearl occurred around the fourteenth century with the arrival of the Franciscans who introduced mother-of-pearl carving to the local community as an income-generating handicraft.
The late-sixteenth century witnessed another milestone in the development of the handicraft. Bethlehemites who had assisted Franciscan Father Bernardino Amico in producing the first accurate surveys of pilgrimage sites in the Holy Land used the results to produce scale models of the various sites – namely, the Church of the Holy Sepulchre in Jerusalem and the Church of the Nativity in Bethlehem – using olivewood inlaid with mother-of-pearl. The evolution of the art continued until it reached its peak in the late-nineteenth and early-twentieth centuries, and began to vanish in the mid-twentieth century.
Mother-of-pearl workshops were a distinguishing feature of Bethlehem and were described by travelers during their pilgrimage to the Holy Land. In his Christian Researches in Syria and Palestine: in furtherance of the Objects of the Church Missionary Society between 1832 and 1833, Rev. WM Jowett wrote that: “there is, in Bethlehem, a considerable manufacture of articles in mother-of-pearl scallop shells & c. on which they engrave in a rude style pictures of scripture history, especially the Crucifiction, and figure of the Virgin Mary and the saints…”, and continues to explain how these engraved shells, and other articles such as beads and crucifixes, were blessed by bishops in Bethlehem, and sold in Europe, after being attested as articles from the Holy City. In addition, pilgrims coming to Bethlehem and the Holy Land used to purchase religious relics made by local craftsmen as gifts and souvenirs for their families and friends, and sometimes as gifts of appreciation for their local church.
Although the masters and sellers of pilgrimage art in general, and of mother-of-pearl artifacts in particular, were from Bethlehem, the main locus of sale was then, as it is now, Jerusalem. The journey to Jerusalem from Bethlehem was a long rough one for the Bethlehemite sellers, but the journey that the pilgrims took in order to visit the Holy Land was of course longer and harder. On their way back home, the pilgrims took with them the souvenirs that they had bought during their visit, using the carved mother-of-pearl shell as amulets to protect them from the dangers that they might encounter on their journey back.
The carved shells represented the mother-of-pearl art at its most refined. The first models were produced with shells from the Red Sea where the inner concave part of the shell was carved and ink engraving added. Later models included the introduction of shells from Australia and the Philippines; the icons and motifs were carved on the outer convex surface of the shell, which allowed the artist to be more creative. The later models were also distinguished for their exquisite fretwork.
The mother-of-pearl shells depicted mainly icons of the Virgin Mary and Jesus Christ, in addition to saints and scenes and events from the New Testament. A single shell might contain a mono-scene or icon, two major scenes; or one major scene in the centre surrounded by a group of scenes usually in circular shapes. Another type of shell contained various scenes of the same size that reflected an event in the New Testament such as the Nativity, Crucifiction, or the Stations of the Cross.
The techniques used in carving, engraving either with or without the use of ink, and the type of fretwork, distinguished the artist or the workshop that produced the piece, and the time period in which each piece was produced. Another factor that affected the scope and quality of mother-of-pearl artifacts was the clientele for whom they were produced; the Bethlehemite artists became very famous for their art, acknowledged around the world, and accordingly started to be commissioned to produce pieces for royalty and dignitories. A major factor that contributed to the spread of the mother-of-pearl art was immigration and travel by Bethlehemites to Europe, the Far East, and the two Americas; during these travels, Bethlehemites took mother-of-pearl pieces with them as relics and souvenirs, or as gifts.
Today several mother-of-pearl pieces which were produced in Bethlehem are exhibited around the world. Mother-of-pearl carvings can be found in the British Museum in London, in the Hermitage Museum in Saint Petersburg, in the Vatican Collection, in Il Museo Delle Grazie in Rímini, and in the Topkapi Palace Museum in Istanbul, as well as in churches, cathedrals, religious missions, and in private collections. 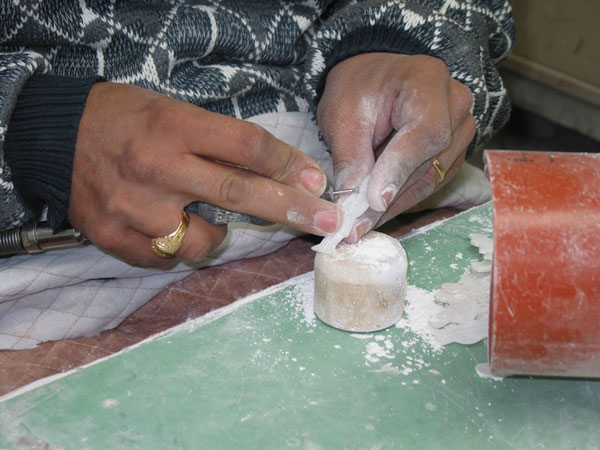 A nail is used to carve the fine details